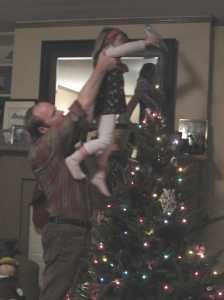 Our little star is feeling much brighter these days. Over the weekend her fever finally abated. While we didn’t make it to see Santa Claus this year; we did have a tree decorating party, an ornament party, a card sending party, a present wrapping party  and a cookie decorating party. And for those that might read this and feel left out- don’t- the party was pretty much just the good cheer and enthusiasm with which we did those things over the weekend. Our dear girl manages to find joy in the ordinariness of household activities. Did I already mention the dishwasher loading party, the laundry folding party, the kitchen and pantry sweeping parties that happen routinely here? The celebrations of most Christmas loving folks- ie- going to see Santa- are more traumatizing then fond-memory-making in nature for dear Zuzu.  I’ll take cheerful sweeping and song-filled table setting anyday from our little Cinderella.  Not to mention the plus of Santa having tried to get her to not cry by offering her candy canes has caused her to think that is what she should ask for for Christmas! We can handle that!

.Our first year I didn’t find a Santa until the week before Christmas. I was driving past a Burger King that had a sign up. So we raced home and donned her holiday outfit and ran back to duck in for a photo-op. They actually had a pretty tree set up just to the left of Santa, but the “Elf” angled the shot with the booths in back. Then Santa made a quip about her being so cute he could take her back to the North Pole with him and I grabbed the baby in a heat of new mother hormones and left. A week later I called back inquiring about the photo. They didn’t ask who we were- apparantly we were the only sorry takers for their offerings.  2007- Take 2- our little school had up a sign about a private photo session with Santa at a local dentist’s office. Zuzu was excited by all the dental equipment. She came around the corner, took one look at Santa and screamed. He was kind and tried singing to her and then finally suggested I come sit by him as well. I did, she turned around and saw him behind us and what you see below is the results. That’s what Momma gets for taking a kid to the dentist for her Santa visit. 2008- Take 3. We talked about Santa all morning and were meeting up with her BFF Sophie and her family at a local Reindeer Run/Pancake Breakfast where Sophie’s mom was running. We waited for her to finish and milled around Santa watching him greet little girls and boys and hand out candy canes. We made attempts to get close 3 or 4 times with Zuzu turning around and marching back to me and demanding I acquire her candy cane for her. I insisted if she sat by Santa he would give her one. I think Santa had had enough of our loitering by this time as well. She went up briefly, snatched the candy and held out her arms for me to save her. After the previous two years I can hardly blame her. We did try again one more time last year at  one of the musems light drive-through displays. We again talked about Santa all day, during dinner, on the drive over, through the lights display and as we hurried up to get in line. She even talked about how he would give her a candy cane and she would sit by him while we waited. When we got to the front of the line she again took one look at him and swiftly turned around proclaiming, “I no sit on his lap”. So we got a nice family portrait that includes a 7 month old in-utero Quail to come. I’m fairly certain Zuzu is already more relaxed about this Christmas with the lack of fat men in red suits and white beards offering her candy for her secret wishes and I can hardly blame her. It is such a mixed message. 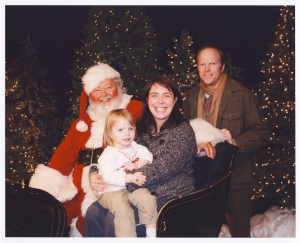 2 thoughts on “Zuzu Day- Our Star”