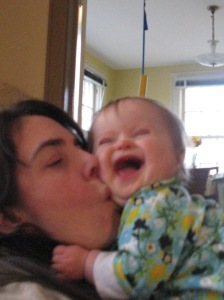 Well the word on the street is we will most likely be paying a visit to our friendly cardiac team in Charleston SC when the Quail reaches 3-5 years old. She has a ventricular septal defect that is membranous and moderately sized. She may have an atrial defect as well- that is unlcear and while if it was the only thing they wouldn’t be talking about repairing it, if and when they do go in they will repair that as well. It appears there may be a flap over it and he used another term- which escapes me right now to describe what it could be.

But the VSD has had some tissue growth around it since birth. Originally our cardiologist said that the tissue growth was a good sign that the hole may be closing itself. The tissue growth essentially forms what looks like a windsock on echocardiogram. So with this growth the size of the hole itself is not what matters. In fact if the tissue wasn’t there we most likely would have needed her to have open heart surgery already. The end of the windsock is what they refer to and measure as the effective hole. That is the size that allows blood to go back the wrong way. And the size of that hole is only 3-5 mm…they think. He said repeatedly to not be shocked if the hole either the one in the septal wall or the effective one ends up being much larger. He’s good at explaining things in lay terms and used the example of trying to take a photo of a sheet that is blowing in the wind and has a hole in the middle. Then try to guess the size of that hole based on the accuracy of the photo. With the wind blowing the sheet around it is hard to tell the actual size of the hole.

For the last couple of visits it hasn’t appeared that there has been new tissue growth and the effective hole has been measuring 3-5 mm. There is still a chance it will close on it’s own- so he isn’t willing to say for sure yet that she will need it. We’ll have a couple more visits to check it out But if she remains as she is, and so far she has had consistent findings at her appointments thus far; the plan will be to go in and close the defect when she is 3-5 years old. He said things would be much more smooth (that probably isn’t the right word), but it’s’ better for her to be a little older to go through the surgery. On the other hand. adults with Down syndrome have a fairly high frequency of developing pulmonary hypertension between their 20-40s and closing the hole could have a positive effect on that. I’m not clear if it would prevent it all together or cause it to be milder. I often find myself nodding along feeling perfectly confident in what I think I understand then when we leave and Lovey and I start discussing it we find we both had slightly different understandings. At any rate; it’s due to that possibility that would be the reason to go in and do the repair when she’s little- not too little, but not too old as to cause any unnecessary trauma mentally or emotionally for having gone through it.

I’m a good midwesterner transplanted here in the south. For me it’s mentally easier to accept this as a worst case scenario- that indeed OHS is in her future in a few years and be delightfully surprised if  the hole closes on it’s own and she doesn’t need the repair. I’d rather that, then to hear optimistic bullshit, that is put out essentially to make me feel better and not worry all the while he would know that she will need the surgery.

The good news of the day is that her past bout of illnesses over the last 3 months didn’t do any damage to her heart. He thought they sounded like bad luck that she got sick and not cardiac related. He said he didn’t see any real reason why she shouldn’t be in her little school. He said the Ds and her heart condition aren’t more likely to cause her to get ill- it’s just that when she does catch something she will act or be sicker in response to something like a cold then a child that doesn’t have those 2 issues. And it may be harder for her to fight off an infection so they may last longer. I was glad to get that affirmation after the last few months leading me to think we should invest in a timeshare in the hospital pediatric ward!

So that’s all for now- it’s time to go put the small ones to bed and be grateful to have everyone here and together. I think I might also go ask Lovey if he heard the doctor say the same thing I think I heard!