Home » Oh the things they do » Quail Day 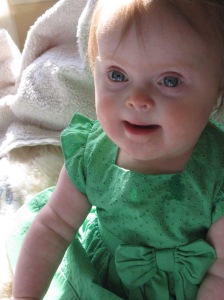 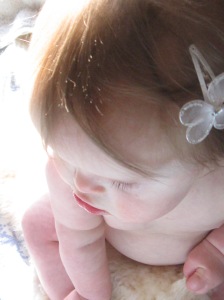 I’m just a little bit in love with this girl and her party dress. I am still ruminating over the lost tiny tiara though. Maybe it will turn up one day. In the meantime she is enjoying her status as a 1 yr old. During therapy she is already acting so much more mature! Well at least she is now talking to her speech therapist and pleased as punch that swinging has been added into her OT’s repertoire. She also in the last few weeks has apparently decided what the world needs now is more love and thus has started doling out hugs left and right. To her classmates, to her therapists and most adorably to her sister. She will holler and holler until she gets Zuzu’s attention, at which point Zuzu will lean in for a hug and proudly pronounce, “Momma, she just needed a hug!”; as the Quail grips on to her with all her might and drools happily into her sister’s hair. The acoustics in the bathroom are especially pleasing for this ongoing reenactment and I managed to capture a bit of the filibuster on film last night. Right now they are about as in love with each other as two sisters can be. On the morning of the Quail’s actual birthday I started softly singing Happy Birthday to her when I saw she was awake. Zuzu broke in and silenced me insisting she needed to do the honors. She finished the song off with, “I love you my sweet sister, you are the best baby ever!” It brought tears to my eyes, as the last time she insisted on serenading her sister with Happy Birthday was the weekend after we brought her home from the hospital. She would alternate Happy Birthday with the Barney theme- I love you, you love me, firmly insisting we all sit in a circle and hold hands while she finish out the concert. I tried to capture it on film then, and it was hormonally deleted. So I’m pleased as punch to have a chance to recapture the sentiment- still as lovely and true as a year ago. I wish this joy and delight in each other for them throughout their lives.