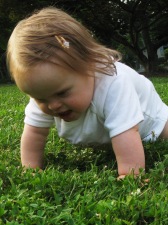 Army crawling has begun… mostly for the ability to get the remote, cell phone, landline, momma-book, netbook, lunging after the poor cat’s tail or to pilfer her sister’s toy. It’s still hard for her. I know army crawling typically comes after rocking on all fours and before true crawling but right now it’s mostly the left arm that is down on her elbow. It’s a bit of an adversarial activity around here though. When any of us try to put her in position and hold her there or go behind her and put our hands up to her feet for something to push off of she squawks at us and drops down. About the only thing good I can say about this daily struggle is the same thing I said about nursing practice with her- at least her resistance is building up strength in her little body. That’s gotta serve some purpose right?

If left to her own devices and a toy is out of reach one of two things happen- up on all fours she goes backwards or crouched into army crawl position she’ll hoist herself forward about 3-4 pulls at a time. If the toy is too far out of reach she won’t even attempt it. It has crossed my mind that perhaps it’s a vision issue- but she seems to notice other things that are at a distance and respond to them just fine.

She’s still working on transitions too. Mostly if on her own they are a flop by accident or a misjudge of distance that turns into a tumble. I think if she could get the transitions from sitting to crawling down and the reverse back up she might be more likely to try crawling more frequently. She’s so feisty about the whole thing. Most reports home from school involve her fighting being put in a crawl position and then them noticing that she’s laughing, rocking back up on all fours once the grown-up has walked away.

On the other hand- her little legs are strong and her balance is pretty good- so standing and us moving her body in a walking motion go well and mostly cause giggles from her. Her PT said she wouldn’t crawl and we should focus on walking and she would be there in the next few months. We really don’t want to skip crawling though- both for the cognitive and the fine motor benefits that she will miss if she skips it.

I guess she’ll get there one step at a time….