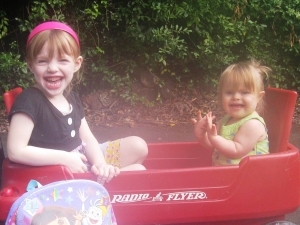 The Stisters (Zuzu’s pronunciation) are on the go! It’s the beginning of the school year and both girls are in the middle of transition woes. About a week into the new school  year it dawned on us that maybe Zuzu doesn’t remember any of her other dear teachers other than the one she had for the last 2 years. Poor thing is having a bit of a difficult adjustment. She seems to be doing ok in the classroom, but she has started bemoaning having to go in the morning, sulks into her spot at group time when dropped off and is a bundle of frayed nerves most of the rest of the evening when we pick her up. The tiniest thing- say, a chip falling on the floor, my stupidly bending to pick it up, my not anticipating her exact reaction to the announcement of bedtime sets her off into a flurry of tears. We’re trying to be patient and kind and lowering our expectations for going out and about in the evening for a while until she settles in.

And she will- settle in that is. She’s excited to have a handful of girls in her class and talks about them endlessly. She’s spent most of her first 3 years in classes primarily comprised of little boys and seems excited to have little counterparts that are equally excited to go to dance class with her. When we went to get fitted for this years outfit the girl flitted and twirled her way through the studio. Both her teachers stared open-mouthed at her energy and eagerness. Both indicated that she was quiet as a mouse the year before. It will be interesting to see if once Momma is not there if she’ll continue her enthusiasm or go back to mousehood.

The 3 year old class is a HUGE change in structure from what she is used to though. The kiddo’s have assigned duties each week and by tuesday Zuzu can list off who is line leader, door holder, spoon hander-outer and table wiper. She’s clear on what gets her daily smiley face taken away and quick to point out to her teacher when she’s earned it back. She happily shows me the footprints around the room that demonstrate where the line-up starts for different activities and shows me where her spot is at the table. She’s a good kid and likes it to be known when she does something right so I think in time it will feel less like too much pressure and more like the comfort of orderly routine.

The Quail’s transition into the Toddler Room is going along pretty well too. Lovey and I have both spent some time in the class with her and each of her therapists have taken turns bringing her in and helping her to get to know the structure and routine. She’s definitely looking forward to getting to spend lunchtime with the big kids. This week while she was finishing up her visit the lunches were brought to the room and as they were being handed out she decided to stand herself up at the table to emphasize that it was her turn! Our girl loves food! And on that happy note I’m also thrilled to report that her thyroid tests came back in the normal range. We’ve had a few reports of how tired she seems a couple of times a week and rather spaced out. I was a little worried that it might be thyroid related but that appears to not be the case.

In speech this week she also started saying “pider” for a tune to be played in addition to holding up her spiders. She also pushes her little foot at you if you ask to see her piggies. We’re working on body parts and belly and head and foot are pretty consistent.

Here’s a picture from the first day of school- gosh they look so big!