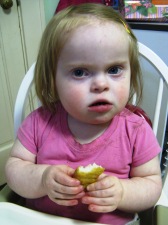 I am dreadfully behind on my crowing over this dear girl.

Since the last update on what she’s up to so much has happened and every single time I go to write about it something comes up and I make a note, look at the length and sheer volume of things I need to document, get overwhelmed and decide to come back to it later. I’m talking 2 months worth of grand hoopla!

So this is a little promise to be back soon with more detailed descriptions and high-lights from the Quail’s days that include grand things like:

*her terrible teething troubles that have 16 confirmed and in place

* her first pee-pee in the potty on 3/21/11, and the subsequent pee-pee and poo-poo adventures which include an already full sticker chart, the additions to her vocabulary of potty and sticker, attempts to undress herself, her clear indications of where the pee-pee is (Right there!) and waves to the extrements as they swirl away…

*her playground bullying…don’t be alarmed…she’s the uberbaby in these stories, not the underdog. Ain’t nobody puttin this baby in a corner!

*her rock-star scoring on her most recent HELP assessment which blew itself off of its’ developmental curve with huge leaps to another curve in cognition and social/emotional. Who would have ever guessed that my baby who has Down syndrome would have the same cognitive functioning as other babies who don’t who are only a couple of months younger and have the social-emotional equivalent of a 23-31 month old. Stereotypes be-damned.

Much,much more to come and pictures galore…but for now this glimpse will have to do….