Zuzu was in her first parade. Anyone that knew me in childhood knows that I do not love a parade. Growing up they were in summer and winter- harsh weather, itchy band uniforms coupled with a slightly anxious disposition created much turmoil in my young head and bladder. Zuzu’s been taking dance classes for the last 3 years. Each year we get a notice home about the local Christmas Parade and an invitation to participate with her class. Each year, I mentally mark it off my calendar and file the invitation away. This year though, Zuzu was quite aware of what she was missing. She knew there was a special holiday dance class sweatshirt, an opportunity to don a Santa hat and strut her stuff. I knew that I had to be out of town for work that day and that it would be too much to march with her in the parade and keep the Quail comfortable on what was likely to be a cold, blustery day. So we explained why we were unable to participate and promised to look into it next year if she remained in dance. 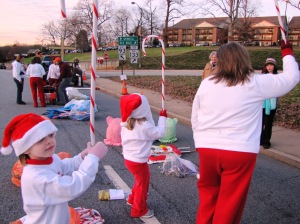 Then the weather fairies collaborated to create enough rain to cancel the parade and reschedule it to a night where there were no obvious problems. AND, Zuzu came home from dance class with a note from her teacher with a phone number and additional invitation to call and get the last extra small holiday sweatshirt so she could participate. So I got down a Santa hat, rounded up some red pants and a turtleneck, bundled up the Quail and Lovey and I headed down to the parade. At first I was delighted. The girls were all smiles and it was nice to be out and see friends that we hadn’t in quite some time.  Then the sun started to set. The dance mother in charge of Zuzu’s age group started handing out candy cane batons and calling the girls over to practice. Zuzu started to hedge. She started announcing she was hungry, then thirsty, then cold, then just gave in to her urge to cling to me.

It was obvious that I wasn’t going to be able to leave her with her group and join Lovey & the Quail at the end of the parade to cheer for her. And that is how I came out of my 20 year plus parade hiatus to march my 20+ week pregnant belly down the main street of our fair town waving to friends that I haven’t seen in months. I learned a couple things in this: the importance of keeping a calm façade in the face of our children who fortunately didn’t genetically inherit my hang-ups and that a lot of the whining I hear from Zuzu seems to stem from anxiety. We went back and forth with the instructions to get in line to the point where the dance mother asked the instructor if we could put Zuzu on the float if she didn’t come around.

I’m happy to report she did come around and proudly led the group of her classmates with her candy cane held high and hollered out her happy holiday messages for all to hear. She was so convincing that it appeared most others than the dance mother didn’t realize the struggle it was to get her to stay there. I even found a small piece of myself that rallied as a proud dance mother encouraging the girls to keep their candy canes up with the group. I’m happy to report that we left with a clear uncertainty as to whether we would do it again.

The Quail’s highlight of that evening was in our hurried walk to get back to the beginning of the parade in time to see Santa waving from the top of the firetruck. Our girl who had shoved away from a previous Santa interaction just days earlier waved fanatically and even was able to work out a fairly loud greeting of “SANTAAAAAA!!!!!!” A sweet end to a festive night.