Had I finished this post when it first crafted its way into my noggin it would have had a VERY different tone. Momma hit a wall this weekend. A wall of down feathers, flannel and fleece, but a wall nonetheless. We are co-sleepers. Not by choice. When Zuzu’s egg was making its way in my belly we prepared a nursery. We had it set up and ready to go weeks before she arrived. The colors and soft fuzzies all lovingly coordinated and cooed over. Then, she came. She cried. She was held and she stopped. She sleep-trained us in a matter of half-crazed weeks and the birth of The Napping House merged with our family rhythms. Frankly, it felt right. It really didn’t make sense to me why two full grown   adults shared one room and a two foot person had her own. It didn’t help that within the first three weeks of her life we had an unfortunate event of a drunken college student pounding his way down the side of our house scaring the dickens out of me, and then a repeat event around a year later. We all slept better when we were together. And I was a nursing, working mother. So- so be it.

Then around 18 months I hit a nursing wall. Zuzu seemed to have decided it was her job to wake every two hours and nurse Momma because Momma loves nursing so much. That had to stop. Momma was getting cranky with the regular wakings. It only took a week. She’s a bright little lark, that Zuzu of ours. She woke. She asked to nurse. I told her the neh-neh’s were still asleep. She nodded and asked for TV. I explained that the TV was asleep. She went to sleep. We had this pattern for only a week and then she slept. At 20 months we were all better rested, but then my burgeoning belly began to take over our queen size bed. Well, the belly and the half-dozen pillows I required to keep the aches at bay. So we started putting Zuzu down in her own big-girl bed. (Notice that her sweet head never touched that crib mattress?). We explained that Momma & Daddy were right next door, and when she woke, she was welcome to crawl in between us if she could do it quietly and without pomp & circumstance. She agreed and most nights she didn’t actually wake until early morning.

Then, along came the Quail. We had purchased an Arm’s Reach co-sleeper to hook to my side of the bed. We had two goals for it. To not displace Zuzu too traumatically as she still wandered into our room early mornings from time to time and to try to prevent our bed from becoming a slumber party for four. That first night home from the hospital I sat down for an evening nurse with our new bird and Zuzu crawled up on the foot of the bed. It was long past her bedtime and our schedule was in disarray already. She sat quietly watching us with doe-eyes and then said in her tiny toddler voice, “Momma & the Quail’s room.” In my hormonally charged state I replied with a teary voice, “No, come here baby, it’s for all of us.” And there went the months of preparation and sleep training. We slept for months like that, the Quail on my right and Zuzu tucked in between her father and I. And it worked. Then when the Quail graduated from the co-sleeping need to nurse all night we tried plucking her down in her crib. And by George, she loved it. It was fascinating, this concept of a child being put to down in a crib, in her own room and, get this- sleeping. Zuzu was still put down to sleep at bedtime in her own bed, in the room she now shared with her tiny sister. But, she consistently ended up in ours. Even at the point in which I was no longer nursing anyone.

I’ve talked about it before, this tired old subject. Of who sleeps where and what’s best for everyone. I’ve had mirages of everyone tucked in their own beds and actually sleeping. For a while we had a compromise where if Zuzu woke during the night. She was to wind a path through the moonlit house and the less creaky of the already open doors to a crevice at the foot of our bed and place her silent-self between us. Really, if no one woke in the process, what was the harm?

The harm became the creaks, the conversation and the nightly wrestling match. The reality is all the doors in our house creak, along with the floorboards. Zuzu had a clear mission each night that she seemed to deem it as her job to come snuggle Momma and Sugarplum. Moreover, if Momma happened to be facing away from a full-on cuddle she felt the need to right the situation. To tug at my neck, and later my shoulder so that I could roll over and cuddle her.  I explained how unearthly cranky it made me to be woken by a four year old hand pressing on my carotid artery. The conversation was generally more pleasant the next day than when we had to have it at 3am.

As my belly once again burgeoned, and the stack of pillows bloomed in light of Sugarplum’s impending arrival, the room for this nightly encounter lessoned and has taken a decidedly unpleasant tone in the last few months. It also has created a rhythm that wakes Lovey and sends him to another room to escape his child-induced insomnia. Sure, he was getting a couple of hours of work done a night. And yes it is extremely helpful to a new Momma to have a husband who is wide awake from 3am to 5am when she wouldn’t mind handing over the newborn feeding reigns. Moreover, it’s become not uncommon for the initial door creak of the girl’s room to also wake the Quail from her slumber.

So, that’s a long winded way of saying, no one is sleeping in our house.

That crystal ball of a brain of mine also tells me that in the next couple of months as we contemplate transitioning the Quail out of her crib and into her own big-girl bed we are soon to gain another night visitor. One who is already keenly aware of her roommate’s nightly disappearance. And, really, there ain’t no more room in this bed of ours. Period. Sure, we could buy a bigger bed. But fact of the matter is the parents in this house need to start sleeping just a wee bit more, before this newest wee one comes to wake us every couple of hours. I can imagine once this wee plum roars her mighty roar in the ears of the Sistred, we’re going to have an all-night dance party in this house of ours. And that, my friends, is good for no one.

At the point in which a routine behavior is making me routinely crazy, it’s time to break the routine. So Sunday morning I came upon the aforementioned wall. After two hours of Zuzu, asking inches from my head, “Is it 7 Momma? Remember we get up at 7 on home days and 6 on school days! I think it’s 7 Momma! Look, Mr. Sun is peeking out behind the shade!” And the Quail roaring her mighty “Oooo-oooo” which means she may be about to poop her crib. I decided 5 years and 4 months was a swell time to institute the never before seen “ I slept in my big-girl bed for 14 days and earned a super-prize” chart. Zuzu surprisingly was tickled at the idea. She got out her doodle pad and markers and set to work drawing the 14 neat, green slots where her stickers would reside marking her way to the newly noted “super-prize”. We spent the day coming up with super-prizes. Our weekly market trip, was marked with notable potentials. Our afternoon, was narrated with trips that could be made for a family super-prize in “Old Gold Car” as she lovingly named our fifties Fairlane.

The chart was hung on her bedroom door, and then moved to the inside for her middle-of-the-night viewing pleasure. The instructions were rehearsed for a wake time of 6am on school days and 7am on homedays. Possibilities reviewed for quiet entertainment, when the middle of the night waking inevitably came. Then as it was my night for bedtime duty. I hugged her, high-fived her, whispered my cheering ons and tuck, tuck, tucked her into her bed for what we hoped would be an all-night slumber party of one. Then I closed the door and held my breath. I recounted to the sheep I had to count to get my own-self to sleep how this was really for the best. That the girl is dying to have a sleepover yet is incapable of sleeping.  That I need to relieve her of her self-imposed job of cuddling Sugarplum and Momma in the middle of the night and reroute it for the daytime.

That the interests in sleep coveted by the 5 other brains in our house (not to leave out Sugarplum and Chula the Cat) was not to be outweighed by this tiny soldier’s diligence to cuddle-duty.

So, we went to bed. And I still woke every couple of hours. Have I mentioned I haven’t slept through the night since sometime in early 2006? My ears prickled as I woke, peed, and listened for the pitter-pat of not-so-little-anymore feet. But there was none. Not a peep. Not a peep from Chula the Cat. Not a kick-kick from Sugarplum. Not a type-type-type from Lovey. Not an oo-ooo from the Quail. Not a single tug on my carotid artery in the wee hours of the mourn.

When I woke, I feared what was to come. The few times in the last year that Zuzu has managed to stay in her bed till morning I’ve been greeted by a weepy mess of a child who is woefully saddened by her lapse in duty. “But I didn’t get to cuddle you Momma!!!!” she wails to me over her Crispy Rice. Then I heard the bathroom doorknob turn (Have I also mentioned that I haven’t had “time” in the bathroom by myself since sometime late in 2006?). I turned with my most stoic of Momma faces in place, and, surprisingly was greeted by the great beam of a proud five year old! “Momma, I did it, I slept all night in my big girl bed! I didn’t even wake up! I just told Daddy! Momma, what were the super-prizes again? Where is my sticker?”

As Lovey helped her apply the sticker firmly to day one of the blessed chart, I breathed a sigh of relief that maybe this actually was for the best. And then I heard the not-so-quiet Ooo-ooooings of a birdly stister who was anxious to join her family in the bathroom. 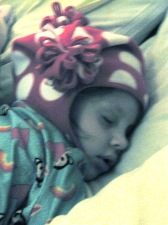 One thought on “Zuzuday: Morning has broken….”