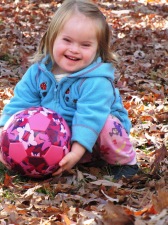 The Quail in gettin’ ready to make her grand entrance into the public school system! Where we live the months prior to turning 3 is when the referral to the school district and the pre-school screenings begin. The Quail’s EI, our dear Jodie; made the referral last August. In November, we met with the school transition liason to learn about the process and had the beginning of the screenings. The first was a generalized screen where we sent a mountain of paperwork detailing the ins and outs of our girl prior to the meeting and then went in for a brief hearing/vision/speech and developmental pre-school screen. We did our best to be ready and put our best foot forward for this grand introduction. Unfortunately, the Quail’s OT session the hour before the screening got a little rocky. She tripped and fell and for the first time in her sweet life split her chin open and bruised her cheek with the fall. She was a real trooper though. A few ounces of kefir and a syringe of Tylenol later, she perked up and charmed her way around the room.

Lovey and I were pretty undecided how well we thought she might separate from us for the screening. Ideally they would like the child to go with them. Although, much like previous Santa Claus visit debacles, after you spend months reminding your children to not talk to strangers, it can be a bit of a challenge to then convince them off the cuff to go with the nice lady while Momma or Daddy stays out here. She’s got good protective instincts. I’ll give her that!

We thought she might be impressed by the apps on their shiny Ipads, but unfortunately we forgot to special order ahead of time a Dora or Barney specific one. Grover is animated, but not one of her favorite buds. We eventually compromised with me standing in the doorway for a bit of the session and they eventually asked me to come back in and I was able to act as a security beanbag chair for our bird.

I think this is where the roadmap gets complicated. I’m all for inclusion. I’m also all for following rules and the process to learn how to. I’ve always felt one of the main lessons that you learn in public school is how to get along in society and how to go about figuring something out. I want the Quail to have the opportunity to succeed and be exposed to a typical classroom. I firmly believe that she is as advanced as she is because she has been in a typical setting all of this time and had the model of typical peers. It’s invaluable to her development. I also don’t want her to struggle needlessly in a setting that is beyond her. When Zuzu has a hard time at school or in one of her fun classes, she gets reminders of the expectations of the class and the need for her to cooperate and follow her teachers instructions. I don’t ask the teachers to accommodate her louder voice, her spunky nature, her inquisitive energy level. I expect her to behave to the best of her ability. When that doesn’t match up with the teachers expectations, we work on it and practice it and go over the rules again and again. I have the same expectation for the Quail. And that girl of mine, she loves rules and routines. That said, she takes a little longer and needs a little more repetition to learn them. I can see now where her lack of expressive speech or her difficulty controlling her gross and fine motor actions are different than her typical peers. She can learn, but it’s different how she learns.

That Quail-ee,  she’s bright, she’s friendly, she’s funny, she’s curious and she loves to learn. She responds well in a familiar setting to our expectations most of the time. Part of that, a large part of that; is how we’ve adapted to her and what we know she can do. The same goes for her current private preschool/daycare where she’s gone fulltime since she was 8 weeks old. This will be a big transition, with a new setting and the need to meet and interact with all new people who have all new rules and expectations. I’m certain she’ll charm them. But her magic isn’t really something that’s measurable, you know what I mean?

I’m starting to think about the concept that a generalized view of the worth of someone with a disability and the value of an inclusive society and what that means for a young child versus a fully grown adult might be different. The Quail’s done well for herself developmentally. In the last year though, areas that frustrate her and she struggles with are much more apparent though, than when she was a baby. If you were to glance at her playground at school, I don’t think she would stand out all that much. She’ll kick the ball, attempt to run to the swing and hop on, she’ll sit in her circle time spot and pay close attention to the book the teacher is reading. She knows where her lunch table spot is, she follows her center activities, she enjoys painting, gluing, drawing and clean-up. Maybe even more than the average kid. She’s naughty- just like the other 3 year olds in the room, but she’s quick to say she’s sorry when prompted and run back in for the make-up hug and surprisingly willing to go to the time-out spot when she’s been unduly unkind to a pal. She’s friendly and confident and proud. She’s no push-over. Take her toy from her and she’s coming after you to get it back. Odds are you’ll get a pinch, a hair-tug or thump on your back for your thoughtlessness.

Then sit down with her and try to start a conversation. This is where you’ll notice the difference. If you ask her what her favorite color is, she’ll just look at you. If you ask her if she has a cat or a dog at home, she’ll look down. If you then ask her what do you do when you’re cold? She may start to show her frustration. Because while she understands the words you are saying. She’s not equipped to formulate a response that she hasn’t been cued to. Those of us that have been with her for the long-haul now have taught her as many things as she’s taught us. I would even say that in a lot of settings she is good at generalizing. It’s just that she can match the colors in front of her or identify which one you need if you ask for a specific one. She knows when she needs a drink and will tell you, but wouldn’t be able to show you where to go to get that drink the first few times you ask. Until we teach her. Every few months as the way we ask things of her changes, I’m continuously astounded at the complexity of everyday life.

So during our first screening, we found a compromise to get the it done. In my momma-bear role, I did my best to keep quiet and let the Quail try to do her best at the standardized test. I waited until I was asked if she is able to do something before jumping in and trying to adapt the new people to her. I was equally impressed with her ability to show them her knowledge of her colors, body parts and familiar objects in her own quiet style and a little disappointed at the skills I know she possesses that she chose not to share. That’s life though right? Not everyone can know everything about you in a quick glance or a 30 minute timeslot. I could see the last year’s worth of cognitive drills that we had focused on being summed up in the standardized test. And while I cringed at not having spent more time with her on some of the more recent additions to our routines, I also know that it’s a fair assessment to say that these things don’t come easily or quickly for her. She’ll get them. In her own time. Isn’t that what people always say about the milestones of a child who has Down syndrome- they’ll get their in their own time? It’s true. For now though, the time has come to share her with a new system. I guess I can’t expect it to be easy for her or us. I need to be as patient with the new system as I try to be with her.

The next step came after the holidays. The school did a psychological evaluation to get a sense of her cognitive functioning and since our SLP works for the school district she submitted the most recent full speech and language evaluation. The psychologist, in her screening was spot on, in her description of the Quail as unique. She noted that she would have assumed, from the Quail’s initial (read: lack of) responses to some of the testing questions that she didn’t have the base of knowledge that she does. At the points in which I was cued to step in and ask the Quail some of the questions I would sign with her and she would sign back. Or I would adjust the wording of the question to a pattern she was familiar with. I’ve felt pretty uncertain about my early on decision to teach her to sign when she didn’t progress to verbal speech on a certain timetable. I’ve realized the lack of expressive speech is really a big limitation for her. That said, I’m grateful that I can communicate with her and that she does have a way to tell me what’s on her mind and heart. Most children with Down syndrome don’t have good expressive speech until the ages of 4-6 years old. In that way I’m oh-so-grateful for dear Ms. Rachel of Signing Time for giving us a roadmap into her earlier on than we would have had without it. And to Miss Sara for guiding us through a diagnosis of speech dyspraxia.

So we’re off into the big world of big-kid school! The school district starts to serve her in this this winter/spring when she turns 3. She’ll continue to go to her current little school-house, but we’ll introduce a new set of teachers who will work with her as well during the week.

We’re excited to meet our new buddies and see how our new school-year will unfold!