The Quail took up status as a resident Captain Underpants in her classroom this past February and we couldn’t be prouder! We had started a potty chart at home when she was about 18 months old and she has enjoyed stickering them up. Before the holidays she had filled up her school potty chart, signifying her taking a place in line to start coming to school in underpants!

She had been managing her pull-ups during the day fairly well and keeping them dry. She also has the world’s strongest 2 year old bladder apparantly as she generally is dry each morning.

So starting February 6, 2012 it was her turn for the insightful training of the Potty Queen- Miss Christal! We packed her little sack of extra “just in cases”. And sent her off to school in big-girl underpants. Which surprisingly our “little” 2 year old turned out to need a bump up to size 4 within a couple of weeks. Whether this was a ploy for new Dora underwear we’ll never know, but I wouldn’t be surprised. Beyonce’s got nothing on this little round booty!

Last week Lovey came home after me and I heard a quiet stilling and then he asked, “Is there something heartbreaking you want to tell me?” I know that could mean any number of things considering all that is going on, but estimating his location I quickly responded. “It wasn’t her fault. Her pants weren’t pulled down far enough. She was dry all day.” Sure enough, he had spotted the tell-tale black garbage bag of school that means clothes have come home with inards on the outards. Fortunately the only accidents she’s had at school so far have been the “pants not down far enough” kind.

She’s trying to put herself up on the potty and she’s got a pretty good balancing act that keeps her upright. The main issue is her ability to pull up and down her pants- under and over. She tries and we’ve realized part of the issues is them being a little too tight with a recent growth spurt I mentioned above. Of course our upsizing of the clothes has led to some rather awkward company-in-the-house moments as girlfriend decides to share her newfound skill with anyone in the house as she marches into a room stark naked or with a new adornment of marker body art or a piece of someone else’s clothing strung over her. In lieu of this new hobby I’ve asked Pudge’s mom to please have Pudge stop texing the Quail step-by-step instructions as I can only assume this hobby came from one of her role models.

Interestingly, whenever I show up at school and try to have her go before we head out (the looming fear of having to tear that carseat apart for a washing is all the motivation I need to get with the program) Miss Thing immediately flops down on the floor and hollers her refusal. And even more interestingly, both of her teachers watch in surprise. “She doesn’t do that during the day.” And that my friends is why I don’t homeschool in a nutshell.

Of course she doesn’t. They never do. Doesn’t matter the issue: sleeping, eating, potty training, staying close to the grown-up. Somehow it’s rarely an issue at school. And yet a full-on soap opera at home. A friend was once commisserating over her child’s picky appetite. “So he eats the beans at school and I bought some to have at home and he refused. I asked the teacher how they prepared them. Initially she just said, well they’re canned. No, no, no…start from the beginning, what store are they from, so you open the can, you heat them on the stove or in the microwave? You serve them in a bowl or a plate…”

When it comes to serving toddlers you can’t be too specific. In terms of our potty tantrums I did learn that they give the Quail more latitude then I do. They approach her every 20-30 minutes (depending if she had actually peed or pooped the previous time) and ask, “Do you need to go potty?” She either toddles off to the potty or says no. Now at home when she says no, I’m a bit more insistent. We’re um, not real great with mess here. But they allow her to say no and then just ask again a minute or two later. If she still says no, they’ll suggest she try and like the conundrum that she is, off she goes. At home she falls on the floor screaming like I suggested we take her duck lovey to the thrift store for a more appreciative child or something. And I carry her flailing self off to the potty. The thing is, more often then not once she cools her jets she does pee.

No matter what grade the tantrum is though, once she’s on the potty you can always count on a toot to bring back her good humor. 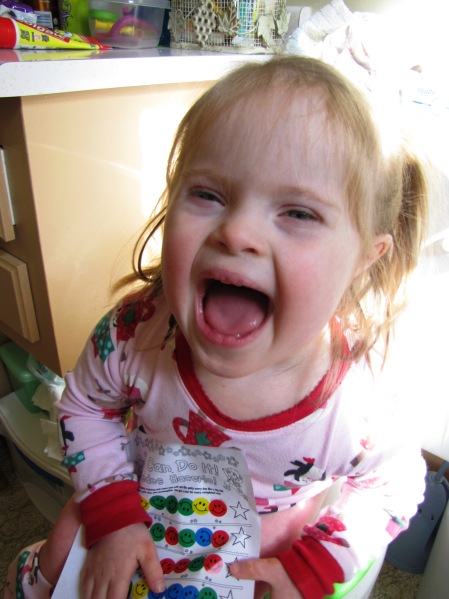