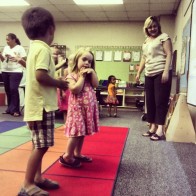 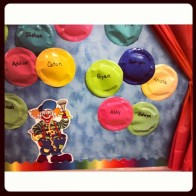 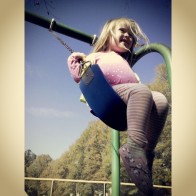 “She’s a beat behind is all. Really that’s all I saw.”

This news came about a year ago from a friend who was subbing for the Quail’s 4k class. I blinked when she told me that. A beat. A pause. A showing of her motor-planning getting the best of her for the moment.

“When it came time for snack and a drink her friends told me that her cup was in the fridge, but when I turned around to get it she was already there opening the door to help herself.” To help herself. She was in her class and helping herself. Following the routine that she knew from the days she had spent there already. When the children danced- she danced. When the children recited both The Pledge of Allegiance and the State of South Carolina Pledge, she put her hand to her heart and turned to the flags. When the children lined up- she lined up.

Or mostly so. She went to the back of the line giggling in an attempt to start a round of hide-and-seek in the classroom. When Mrs. D told us, we were as concerned as she was. Maybe more. A big part of public school is learning to follow the rules- the rules that keep things organized, fun and safe for everyone. This slight deviation from the organized chaos was really only a concern in the event of an emergency if the chaos were to become unorganized. We would have to talk to the Quail about this. She was already familiar with our family’s well-worn mantra, “There’s food time and there’s play time.” We would have to adapt it to there is “There is listen and line up time and there is play time.”

“I’m so glad you pushed against the school’s concerns.” This came in an email from the teacher after having been with the Quail for a good bit of the school year. “The Quail is very popular and has a lot of friends. She is nurturing and takes care of anyone who is sad or hurt. We love that about her.” “ She is doing very well in the classroom. I wish all of the children were doing as well as she is.” Those words let me breathe out. It’s one thing to be philosophically certain of your stance on an issue, such as say- inclusion. It’s another thing to stand back and watch it play out in real time as it wavers between validating and mocking your intent.

But it went well. Put simply- she did fine. I expected less than fine. I expected a bumpy transition. I expected multiple meetings and whispered warnings of this good thing coming to an end. I was prepared with the legalese in the recesses of my brain for any hint that it wasn’t going as it needed to. The Quail- she didn’t need to keep up- that beat, that pause…that was fine. She just had to make progress. That’s what the law requires, what the law allows for and as the previous principal had stated after much scolding and scuffling-in the well-orchestrated dance of an IEP, they will meet her needs individually and legally.

And so they did.

But they did more than that really. They met the Quail with open arms and hearts and brought her into their classroom, now her classroom into her community and welcomed and loved and taught her. She learned so very much last year. The progress- while subtle, was undeniable. Her happiness at getting to go was undeniable. She wanted to be there. She was happy to be there.

I really didn’t have much to say about the school year as it progressed. The weeks went by smoothly with very little back and forth in the adjustment to half days of school, bus rides, lunch ordering and learning to read. In the early spring, we did receive a phone call from the therapists, one day the OT, the next the PT. Both asking for adjustments to the IEP. The Quail- she did not want to leave her class to go with them. Once in the hall, she dallied. She danced. She did everything but walk in an orderly fashion from the class to the therapy room. That first call day she had plopped down on the floor. She wasn’t getting up. She wasn’t moving. And this was a problem. As the therapist detailed the specifics to Lovey over the phone it came out that it had been an issue for a while now, the Quail’s not wanting to leave her class and her friends to go with them. Some days worse than others. The IEP progress update that came home later that month indicated a lack of willingness to not only go to the other room, but to do the work asked of her once in it. Ironically her report card from the regular class had also come home and showed good marks in most everything except the ability to articulate a clear sentence. It seemed she was acing K4 and blowing Special Ed. Later when we met with Mrs. D she talked about the day we had gotten the phone call. That the therapist had been expected 20 minutes earlier and hadn’t shown. That when she did come, the Quail had already had her coat buttoned and was in line, in clear view of the playground- ready for recess. That was what had made her angry. That is why she had plopped down. That was also why therapy is so important- maybe, just maybe if she had been able to articulate what was upsetting her- maybe, it wouldn’t have just come across as bad behavior. Maybe. I don’t really know. The irony is that 2 of the 3 goals on the IEP- well they were playground friendly. The therapist could have worked on those on the playground rather than turning the hallway in to Thunderdome. The update to the IEP helped. They asked permission to move from individual to small group therapy. Once the Quail befriended the little girl, things went back to the typical chaotic calm.

We survived that week. I can’t say that things got tremendously better with the therapists. Notes on later progress reports seemed to center around “working on compliance”. Which I read as therapist speak to explain why little else was getting done. In spite of that nothing peaked or boiled over though. I ran into the district’s behavioral specialist at a gathering at one point and introduced myself. She told me she was aware of us, but fortunately hadn’t had the “pleasure” of being called in to formally meet the Quail. For that we were grateful. Nervously grateful.

In addition to the books, art projects, pictures, songs and dancing the class put on 3 little plays- a Thanksgiving Pilgrim and Indian one, a Christmas Gingerbread one and a Cowboy salute at their mini-graduation. I’m proud to report I cried my little heart out at each and every one. The Quail- her little star shown up on stage as she danced and sang and cheered and bowed. She was all in. And for that super start to her educational career- we remain grateful. 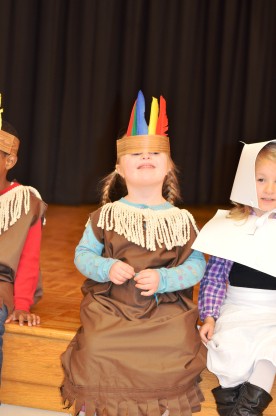 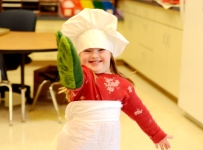