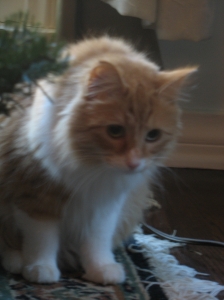 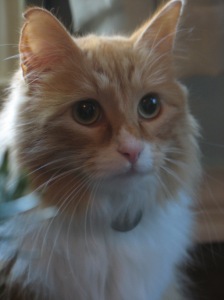 Lovey’s brother is in between homes right now and when he is in his home he is rarely home. So sweet little Challula- affectionately known by all as Chula is coming to live in the Blue Ridge Mountains with us! Chula came to him by way of his Auntie’s farm. We are excited to have a chance to bond with she; who has essentially become the family cat. She will be making her way to us on this Friday. Zuzu will officially be named her person. Zu is beside herself with excitement. We had a lovely Kitty- named Sasha who we affectionately called Kitty until Zuzu was about 4 months old. Sadly he passed away from kidney failure. During one of the rare snowstorms we get in our part of the country. We’ve been a bit too grieved to find a new pet until recently. We briefly had a sweet little kitten take up residence in our garage earlier this summer. But sure enough, the day after I took him to the veterinarian for a well check and round of vaccinations he disappeared. I’m fairly certain I know who has him. Rumor has it he has taken up residence with one of the animal-loving staff at our local bakery. By the time we found this out though he had been gone a month and we felt it wouldn’t be right to ask for him back. Zuzu knows he went to live with “his family” and is quite content talking about it in those terms. When she heard Chula would be coming to live with her though her first comment was, “Yay! I will call her Solomon!” Which is what we had named the other kitten. When I explained that this was a different kitty and one that already had an identity she smiled and said, “Yes- then Solomon can come back and live with us too!”. Poor dearie- she is quite matter-of-fact about the whole cat conundrum and hopefully Chula will stay with us a good long while and become her BFF.

One thought on “Meet Challula- The Family Cat”