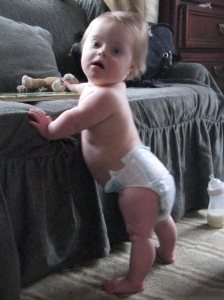 We have a standing baby! I was checking in on little LC and watching some of the video footage of her and thought we might try their neet standing trick going up from sitting on a little stepstool. And I’ll be a monkey’s uncle (or a little bird’s mama!). It worked!  I’m not sure exactly what it was that made it sooooo very easy to get her to push up to standing but it was an awesome feat. And my eager display of pride made it a quick favorite of the Quail. After a few times of trying that we went ahead and started from laying down, to letting her pull up on my hands to sitting and then to pull up to standing! Brilliant! At PT on monday we showed off our new trick and happily impressed our PT. I was complaining that when Jodie (EI) gets the Quail in standing she just pops her up from her lap, but when I try she usually ends up with a faceplant deep in the rug and less than pleased. So we practiced and right away he noticed that the issue was the position of her feet and the need to have them planted firmly on the ground before applying a slight pressure to her thighs to “pop” her up off my lap. Easy-peasy- once I realized what the problem was. As he pointed out- it’s stuff like that, that keep him with a job! She was even able to stand bracing herself at a bench and also over a basket and soon enough forgot about the new feet of standing and moved back into playing like she does it from that angle all the time! We’re so proud!