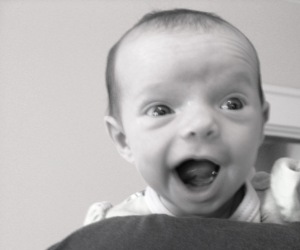 By the time I was six months old, she knew something
was wrong with me. I got looks on my face
she had not seen on any child
in the family, or the extended family,
or the neighborhood. My mother took me in
to the pediatrician with the kind hands,
a doctor with a name like a suit size for a wheel:
Hub Long. My mom did not tell him
what she thought in truth, that I was Possessed.
It was just these strange looks on my face—
he held me, and conversed with me,
chatting as one does with a baby, and my mother
said, She’s doing it now! Look!
She’s doing it now! and the doctor said,
What your daughter has
is called a sense
of humor. Ohhh, she said, and took me
back to the house where that sense would be tested
and found to be incurable.