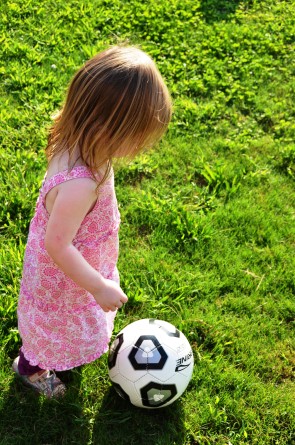 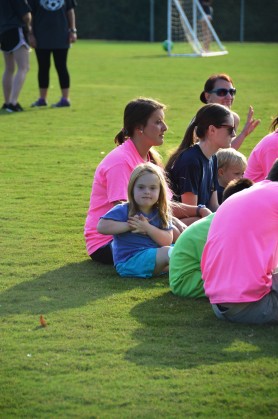 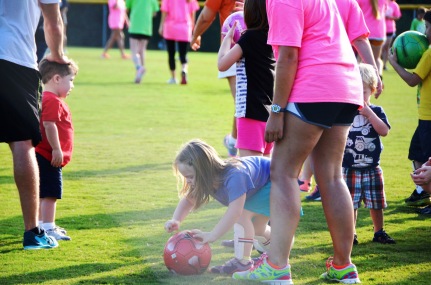 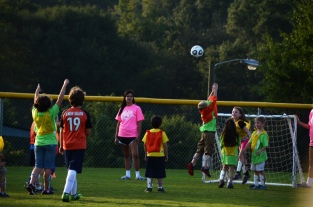 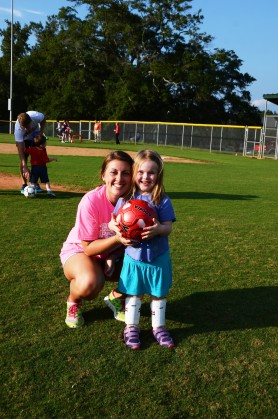 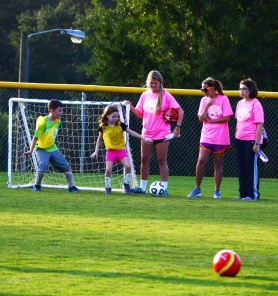 “Zuzu- What is this?” I point to the drawing of a stick-figure with a bow kicking a black and white ball.

“Why does it say that’s your favorite sport?”

Fair enough. She’s been saying it’s her favorite sport for years. She’s never asked to play and she doesn’t go anywhere near the net and balls we’ve procured for our yard. We bought those a couple of years ago because of similar drawings and descriptions of her favorite things. Yet, nothing. And after repeated questioning of why not dance or gymnastics or even hula-hooping- all of which she spends and has spent considerable time, money and effort on, she finally asked when we could sign her up for soccer.

But we can’t. Not really. Not realistically. The time just isn’t there in our days. Typically soccer is 2 nights a week and a day on the weekend. Those for us, are booked. And not just because of the Quail’s “special needs”. Certainly therapies cut into our workday schedules and are a priority. And certainly I wish I had more flexibility to be the one to take each of the girls to every idea that crossed their hearts and minds. It’s because in our house sleep and being learning ready are front and center in the weeknight priorities for our house. When the girls were little they were able to spend the mornings with Lovey until 9 or 10 while I headed out to start work at 7:30 am so that I could leave work at 4pm and still have the sun up by the time I was back with the family. When the girls did dance or gymnastics it was on Lovey’s more flexibly banded watch. Even Girl Scouts is made possible due to the awesomeness of our village and our Troop Leader’s willingness to swing by the girl’s after-school care to grab Zuzu on her way to the meeting. Now that the Quail has aged out of the Early Intervention programming our evenings no longer include therapy except for the occasional visit from our beloved EI. Even with that time being freed up and no longer devoting two nights a week to speech and early intervention our time doesn’t feel so plentiful. Because now, now they are school age. Now they come home with backpacks brimming with markered worksheets, weekly newsletters, permission slips, homework assignments, writing journals, library books and the random bits they’ve scavenged off of the playground- you know the half broken purple plastic heart-shaped barrettes, sparkely rainbowed beads from a sadly broken necklace, half-scrubbed and abandoned erasers, Taiwanese dollars, crumpled up hoodies and the extra cereal bar they snuck out when mean old mom told them they could only take one to school for a snack. And then there is Sugarplum- our pre-schooler who seems to have finally acquiesced to the idea of no more home-from-school-I-just-realized-I-was-separated-from-you marathon nursing sessions. She may have acquiesced in that way, but that doesn’t guarantee that you won’t notice her.

Three little girls now noisily make their way from the car to the house in a procession full of protests, announcements and grumpy tears. Usually ones that stemmed from mean-ole-mom telling them in a more than a bit raised voice for the 12th time that they need to stop horsing around, get their backpacks and we. need. to. go. now. after what is typically a 15-20 minute dawdling pick-up from after-school care as they race and hide and seek their way from one end of the building to the other telling about each others day and who has kept a star, who has lost one, who hugged their friend around the neck too tightly, who bit them and who didn’t share. Once we’re home there are tubbies to wiggle around in, clean diapers, jammies and next-day clothes to choose, dinner to eat and left-over homework to squawk through, teeth to brush and voila- it’s bedtime. 7:30. 7:30 is the goal this year. It’s rare we meet it, but it’s good to aim early.

Then a few weeks ago, Lovey and I had a rare weeknight out for a dinner with his co-workers. At that dinner I met a man who had helped us years ago in talking about special education and the local school system. Coach K, as he is referred to, helps to coordinate a local soccer program nationally known as TOP Soccer. Each week, college kids volunteer their time to buddy up with children with special needs to learn how to play soccer. They spend the time doing warm-ups and eventually playing the game. We asked if it was only for children with a diagnosis, since we were pretty certain that if the Quail went to soccer, all hell would break lose when Zuzu heard. Coach K said that absolutely Zuzu was welcome. They meet one night a week at a local field and generally have enough extra buddies that Zuzu could be assigned one as well. Perfect.

Except, for the one thing we didn’t think through. It’s for ages 5 and up. Not, 2 and up. And with us all heading there to watch, a certain someone, was bound to notice that her bigger sisters were going to be running on a sunlit field after a ball with lots of energetic onlookers cheering them on. So we planned ahead. We had water and snacks for all 3 and an extra ball intended to entertain little one who didn’t meet the age requirement off the field. Unfortunately it wasn’t sufficient. We spent the first night chasing her back off the field and attempting to cheer along between hollers at her to get back here as she repeatedly giggled over her shoulder running into the crush at full-speed. Sigh.

And then there were the big girls. The big, need-to-get-their-sillies-out-all-too-clear-their-parents-aren’t-in-charge-and-will-take-a-while-to-get-to-them, girls who realized with buddies that are new to them, they could easily negotiate an evening of free-form running and hollering rather than following the lead of their buddies and team-mates into anything even remotely resembling a soccer game. Lovey and I stilled our helicopter propellers from the sideline while my heart-rate inched it’s way higher and higher as I noticed each week that one-by-one practically every other kid had started to, well, play soccer. You know the activity we were there for? And there was two-thirds of the Sistred running in tandem with a small goal net over their heads while their buddies trailed along after, trying to tow the line between being light-hearted and affirming versus actually making them do what they were there for. Fortunately for the girls, Sugarplum managed to occupy most of our attention with well timed darts that alternated the field and the parking lot so that we couldn’t really helicopter our way over their behavior. But I was frustrated. And that’s a nice word for it. After the first night Zuzu received a stern lecture about the game, teamwork and sportsmanship and maybe a suggestion to lay off trash-talking the kids on the other “team” when they were going in after the ball. After the second week, she was keen enough to see the disapproving looks I was radiating as she managed to goof off just out of my reach. Later that night she told me she didn’t want to go again. The Quail, she shrugged off my frustration and continued to cheer for soccer night the next Wednesday morning. Zuzu, after two lectures told me she really didn’t want to “play”. As I held in my retort that she was yet to even try, I managed to pull up my mama-pants and ask why. She said she just got in trouble and my lectures had taken away all the fun. That’s fair. I’m not very good at masking my frustration when they willfully ignore instructions. And at this point I was more than a bit at a loss at how to remedy this.

Because the thing is, I really like going. The first week, seeing this large group of kids in my community that I had no idea existed all out playing together with this smiling set of good-hearted college kids- it warmed my heart. It was fun and spirited and well, fun. The Quail and Zuzu loved the warm-up Duck, Duck, Goosing., the ball chasing, the new team-t-shirts and the smiling buddies. The Quail, as usual, was following Zuzu’s lead. And Zuzu, was just not willing to join in the team-spirit of the activity. She wasn’t asked to be a coach- and being coached- it’s just not her thing. The third week I was really, really frustrated. By this week the group broke into two games for most of the session and there were our girls, running with a goalie net over their heads laughing to high heaven. Maybe I should have let it go, after all, if the Buddies or Coaches weren’t going to step in, maybe I should have looked away. Zuzu already hadn’t wanted to come back after private lectures, a public one was not likely to endear her to the activity.

I stepped in. I told the girls they had five minutes to follow game and practice instructions from their buddies and if they didn’t I would be taking them home so that buddies could be reassigned to children who actually wanted to learn how to play soccer. They shaped up. They didn’t join a team, but they practiced with the ball. On the way home I was quiet. Which was more alarming to Zuzu then any lecture. On the drive home she announced how much she was looking forward to soccer next week.

And still I remain. I’m really not sure what to do. I had already told Zuzu that she didn’t have to sign up again, but that we need to learn to honor our commitments by finishing out this season. But the thing is, this is not the first time we’ve struggled with this issue. And I don’t want her to take over the fun that the Quail has. The Quail would most likely be willing to participate the same as the other kids, if her sister would, or if her sister wasn’t there. I’m the one that wanted to integrate the sport organized for children with special needs. And others were happy to accommodate me. All were welcome. It’s not lost on me though, the irony of the fact that my two“typical” children, well they are the ones requiring more than a bit of redirection and attention.

I don’t know what to do. And I’m sure this won’t be the last time I feel that way. This weekend I brought it up in the most even-keel tone I could manage.

“Zuzu, let’s talk about Wednesday afternoon. What do you want to do- sit in the stands with a book? Or be on the field- you tell me.”

“On the field.” Her solemn eyes looked into mine. A rarity for her. And I looked back, pulled her into a hug and simply said, “Ok.”